SumoBoom near completion, even if it did take a bit longer than I was hoping for. Originally wanted a game I could wrap in a month, but scope grew.

The finished product is well worth the additional effort. I couldn't be happier with how much fun it is to throw ragdoll sumo wrestlers around. Either pushing them out of the ring, or down to the mat. Or (after bulking up) simply throwing them through the air!

It's a nice feeling being addicted to your own game. 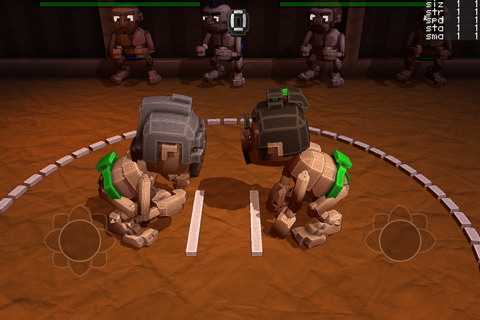 One thing I was hoping to have was a minimalist control scheme: two buttons!

All a sumo wrestler needs to push his opponent around. And not much for the player to master control wise, other than the minor leap that you had to hold both buttons for forward. Think of a sumo wrestler as a tank. You need to move both treads to drive forward.

Things got trickier when grappling the opponent to throw him around. I was using the iPhone's accelerometers to control what direction you wanted to push the opponent in.

The trouble is that in the heat of the moment, the user has a tendency to over steer and it's harder to follow the action with the decide twisting left and right.

It also meant having to cut out portrait mode (which is my prefered way to play) as the iOS's logic to switch between orientations was way too sensitive.

So I went with a more tried and true control scheme: dual analog. 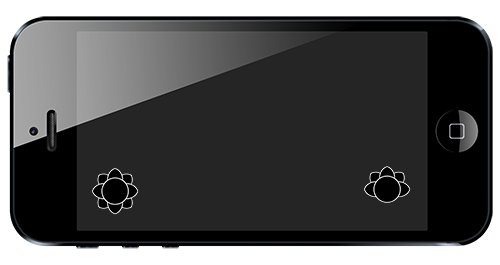 Advantages...
1. It allows wrestlers far move freedom to back away and control their position in the ring.
2. More exact and responsive control over how you want to push your opponent around.
3. Player's eyes can focus on the screen without it moving.
4. People are very familiar with dual analog games.
5. Portrait mode (my favourite!) is back in.

Still simple, but probably not minimal.

However, it gives the level of control that players will want from a game like this. And that's more important.

I still want to do a one/two button game in the near future though!

One common dilemma that comes up in game development is balancing out tech vs fun.

Sometimes, the tech itself is fun. Like a ragdoll falling down a flight of stairs. That's fun to watch.

However, there are times when the tech can be at odds with fun. For example, a carefully constructed city simulation complete with budgets and complex taxation system could be extremely well built to the finest detail. But if the main point of the game is city building, budgets and taxes might be better kept simple so the player can focus on what he wants to do: build a city. Not staring at a budget screen for 30 minutes trying to allocate each tax dollar.

So then, my Sumo Boom dilemma.

With the powered ragdoll driving the character, one thing I experimented with is having the ragdoll's walking feet animation actually drive the character's movement. Actually it worked great in the game in a test environment (just ignore the fact the character wasn't smart enough to stop and turn ).

But the problem is that the friction necessary from this, combined with the animated ragdoll implementation meant that the opponent couldn't generate enough force to push the player backwards. And vice versa.

So the tech of having more realistic walk animation is at odds with a core gameplay principle of pushing the other opponent around (which is the fun).

Go back to little friction and have the sumo slide? Which even though it doesn't look realistic, is actually extremely fun and fast paced.

Sort out some way of having the feet step back in response?

Have the feet slide back in response to the push?

Reduce feet friction due to being pushed?

Okay, so after sleeping on it (which is usually the best solution, future developers and programmers take note)...

Well, having committed myself to doing a better job of keeping my Stinger Games website alive, here we are another shot at a blog.

I guess the bigger story is that I've got three games on the horizon...

First, Sumo Boom. A totally new take on fighting games. In a lot of ways, it's an experiment and an exploration. It's just so different in terms of gameplay with two button controls and completely physics based powered ragdoll animation. And it looks pretty slick too with its papercraft-ish look.

Second, Retro Hockey. Which is like your old NES Ice Hockey or Blades of Steel hooked up with Stinger Table Hockey and had little voxel baby hockey players. Oh, that also has some ragdoll physics too for bodychecks. Sweet!

Third, War Control. I've put a ton of work into it. But had to step back for a bit as it got really big. I probably overloaded myself with what it is. And still wanted a few more things to be just right. Well after finishing up Sumo and Hockey, then this nuclear bad boy can be unleashed! (side note: in interest of peace and happy existence here on Earth, let's keep the nukes in the game, not in real life!)

The good news is that I've setup some Python scripts to do most of the work for me using templates, much like Jekyll. I should have probably just used their tool. But stubborn me wanted things setup just the way I like it, and after all I'm a programmer.

Including setting things up so I can blog from my iPhone. So I can do posts as the day wraps up and I can get my thoughts out before my brain shuts down.

So wish me luck keeping this alive.